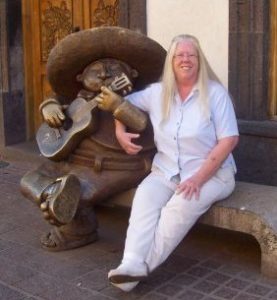 Today we meet Barbara Hopkins, an expatriate who is originally from the United States who now lives in Mexico. When we first approached Barbara about participating in our expat interview series we asked her what made her story so interesting. She replied: “The most interesting thing about me is that I’m the only expat that I know down here who lives entirely on my very low Social Security payments. Otherwise, I’m pretty boring.” As you’ll read from this interview… Barbara is far from boring!

Can you please tell us a little about your background and what initially made you move to Mexico?

During my working years (from age 17 on), I lived and worked in many different places, but all within the United States. Among other jobs I held, I was a legal secretary in San Francisco and New Orleans; a go-go girl in New Orleans (not at the same time that I was a legal secretary!); a group tour coordinator in Waikiki; an anthropology assistant instructor at Indiana University in Bloomington, Indiana. For about 14 of my last 17 years of working, I was employed by one of the largest concessionaires in the US National Parks. During that time, I worked at Death Valley National Park, Everglades National Park, Bryce, Zion, and the north rim of the Grand Canyon, and Petrified Forest National Park in Arizona. At the time I retired (April 2008), I was the controller and human resources director at Petrified Forest. I did NOT work for the National Park Service; I worked for the concessionaire (the folks who run many of the hotels, gift shops, and restaurants in the US national parks).

When I decided to retire at age 60, I knew that could never afford to live comfortably in the US on my social security payments, so I started to look around for another country in which to live. Because I had not previously traveled outside the US, I chose Mexico, primarily because it was close enough to the US to allow me to return easily, and because of the cost of living. I had checked out lots of Central American countries, but Mexico seemed to be the best for what I could afford.

What were your first impressions of Mexico? Did you suffer from culture shock? How did you deal with your initial emotions?

My initial idea was to retire in Baja California. In September of 2007, I spent a week in the small village of Mulege in Baja California Sur, Mexico. While I was there, a hurricane got quite close to us and I decided that I had withstood enough hurricanes in New Orleans and Everglades National Park, and also that I just could not tolerate the high humidity anymore. So I scratched Baja off my list.

In doing a lot of research on the computer, I stumbled onto Lake Chapala in Jalisco state, Mexico. I came down for a week in December 2007 and fell in love with the weather and the place. I moved down in April of 2008.

My first impression of the Lake Chapala area was how fabulous the weather was. In December, the daytime temperatures were about 72 degrees. The days were full of sunshine and the temperatures dropped off at night by about 20 or 25 degrees, making for great sleeping weather!

At that time, I didn’t really know that the north shore of Lake Chapala is an expat enclave and I was surprised at the number of local folks who spoke English. Since my Spanish was pretty much nonexistent, that was a great comfort to me. I rented a car during that week and drove around and into many of the towns on the north shore. Some I rejected as having too many gringos (remember, I worked in the US National Parks for many years and touristy places were anathema to me!). But a couple of the pueblos on the north shore really intrigued me, particularly Chapala and Jocotepec towns.

So sight unseen, via the internet, I rented a place for a year in Jocotepec municipality. It was in a gated community. It was a great “jumping off” place for me. I felt safe and yet I had Mexican neighbors on the weekend when they came down to their “lake places” on the weekends and on holidays.

So, no, I didn’t really suffer any culture shock. I am by education an anthropologist and by nature curious and observant. I find people who are different from me fascinating and always like to look for the functionality of their culture. I have never believed that “the American way” is the only right way.

What are your favorite things about living in Mexico?

On a very pragmatic level, my favorite thing is that I actually can afford to live here and actually live better than I did in the US on a very limited income. As stated above, I also love the weather around Lake Chapala. Aside from Hawaii, this place as the best year-round climate I have ever lived in.

As a student of cultural/social anthropology, I am fascinated by life as it is lived today here around Lake Chapala, as well as life as it was once lived here.

What things do you least enjoy?

There was and is very little that I don’t enjoy here. The thing that I am least happy with is one of my own failings. I still cannot speak Spanish very well, even after four-plus years here. I would love to be able to speak more to my Mexican friends and neighbors, but I can’t.

I can function okay day-to-day and ask for things that I need, but I really miss out on being able to have some in-depth conversations with anyone other than English-speaking expats.

What advice would you give to someone who was relocating to Mexico for the first time?

No surprise, given my comments above: LEARN SPANISH!

Interestingly, you have managed to support your lifestyle in Mexico purely on social security payments, please tell us a little more about how you have achieved that?

The most important thing you need to be able to do if you are living on a very low fixed income is to be able to differentiate between what you NEED and what you WANT. My social security monthly payments are about $900US right now, but for the first two years I lived here, I had NO income (I was only 60), and when I my payments started, they were only about $750US a month for two years because of deductions held to repay student loans. (That’s not quite as crazy as it sounds. I didn’t start college as a freshman until I was in my mid-30s and then continued on into graduate school in my 40s.)

The first thing you need to do is consider your fixed costs for things that you need: shelter, food, clothing, utilities, vehicle registration, your Mexican visa, and health and vehicle insurance. And then you go from there and make your choices.

What three money-saving tips would you give to someone who was relocating on a shoestring?

(1) I cannot say this enough…determine what you NEED versus what you WANT. Buy Mexican brands in your local Mexican grocery stores for your food. Don’t buy or rent a showplace house if you can’t afford it. Don’t expect to have a pool at your house if you’re not going to use it constantly. The cost of running the pool pump, combined with the chemicals needed to clean it, can be exorbitant. Don’t run all your electrical devices all the time. When you are using them, turn them on. When you are not, turn them off.

(2) Find your entertainment in your own area. Play games and have potluck lunches and dinners with your friends. Take day trips with others and have everybody pitch in for gasoline and toll-road fees. Dine out at your local restaurants. They can use the income and you’ll likely find some great meals.

(3) If you are going to rent [as I do], try to find places on your own. Don’t go through realtors. Talk to your friends and neighbors or use the local web forums. Decide where you want/can afford to live. The difference in rental prices between Ajijic and Jocotepec, for instance, can be great. Post your wishes on local webboards. It’s amazing how many great places are out there.

What do you think is the biggest lesson you have learned from living overseas?

The biggest lesson I personally have learned is that the US is not always the best and the brightest nation. It may be the most powerful, but that’s something different. And Americans need to really learn about other countries. They stereotype not only small groups of people, but entire nations. Of course, as an anthropologist by education, that’s always been a pet peeve of mine, but living in a different society has just reinforced it.

You currently write a blog that chronicles your adventures in Mexico, how did that come about?

After I had lived here about three years and after getting numerous questions from my friends in the US about what life here in Mexico is like, I decided it would just be easier to post about my life on a blog. It has a small readership, but at least it tells my friends about what my life here in Jocotepec is like. I try not to extrapolate, but I do try to give them a feel about what my area of central Mexico has to offer.

I’m almost 65 and I’m living on a very small fixed income, so traveling around the world is out for me. That’s probably the only thing I miss from having worked in jobs that I enjoyed and not jobs that paid well. If I do move away from Lake Chapala, I would likely move elsewhere in Mexico. But it would be hard to top what I have right here.

You can learn more about Barbara on her website: http://bigskysouthernsky.wordpress.com/