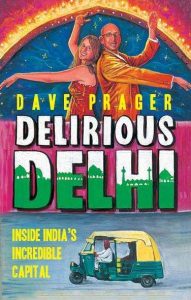 Delirious Delhi: Inside India’s Incredible Capital was written by expat blogger Dave Prager, author of renowned online diary ‘Our Delhi Struggle’. His book compliments his blog and describes how he and his wife Jenny left behind their home of New York in order to spend 18 months living in New Delhi: “When the Big Apple no longer felt big enough, Dave and Jenny moved to a city of sixteen million people – and, seemingly, twice that many horns honking at once. Delirious Delhi depicts India’s capital as the two experienced it, from office life in the rising tech hubs to the traffic jam philosophy that keeps people sane in the gridlock leading to them.”

Expats who were keen to ensure that they got out there and truly experienced their host country, Dave and Jenny made a concerted effort to have ‘an authentic Dilli experience,’ and this would lead them to discover many hidden treasures and really get to the nitty gritty of the true Delhi. The one thing that is clear from the book is that Dave and Jenny loved Delhi and this was perhaps the direct result of their willingness to break free of the usual expatriate hangouts and really get beneath the surface of their host country.

Food was clearly a big factor in Dave’s life in Delhi and he and his wife were a huge fan of the delicacies they found there. From the chhola bhaturas, dosas, the rolls at Nizams, Roshan di kulfi at Karol Bagh through to the revelation that “the best South Indian food in Delhi can be eaten at Saravanna Bhawan,” the couple were part of the Eating Out in Delhi group and subsequently sampled food that regular expatriates have probably never heard of.

This is a great book for people who are contemplating moving to Delhi or those jaded expats who are currently living there but don’t feel like they are enjoying it or getting the most out of their experiences. The book contains humor, an eagerness to get to the real marrow of the city and an enticement to live life to the full that can’t fail to rub off on even the most reluctant expats. Of course the book also points out some of the downsides to living in the amazing city of Delhi but counters with these with some of the more positive points, thus presenting an account that is fair and balanced.