Eternal migration of a spotless housewife: Driving in Singapore

Back in February, after a few weeks of living here, my husband and I decided for driving in Singapore, we needed a car. In Hong Kong it never crossed our minds to buy a car because the taxi system was so good and there really was very few places where you could drive at a speed above 10km. Here, however, less taxi drivers are willing to take dogs and the whole place is generally more car friendly.

As previous International Business Woman of Mystery (self-titled), I have had the pleasure of driving in many cities throughout the world. But I can tell you this now, nowhere on the face of the earth (and I include apparently lawless Naples in this) have I come across such bad driving. Since I commenced driving in Singapore I have started to see the locals in a whole new light. It seems that as soon as you put a normally mild-manner Singaporean behind the steering wheel of a car they suddenly turn into a crazed maniac… on acid! 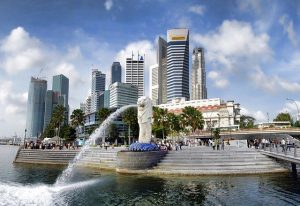 This morning, for example, I observed people changing lanes without signaling, refusing to give way to any other vehicles, driving along the centre of the lines as opposed to the centre of the LANES, tailgating, and taking up two lanes when swerving around a corner… and all this happened before I reached the end of the street I live on.

Now all this is made all the worse by the fact that the car I am driving is ridiculously expensive. Here’s a quick run down of the costs:

1) All cars need a Certificate of Entitlement (COE). Only a few COE’s are released on a monthly basis so people bid to own one. At the moment, COEs are trading at around $30,000 SGD, that’s just under $24,500 USD for the bit of paper that says you can own a car. I expected mine to be edged in gold at that price… it wasn’t.

2) Any car worth owning here is imported and all imported cars have 41% duty charged on them. That, coupled with the registration fee ($1,000 to $5,000), means that your car is going to cost at least 50% more here than it would do in your home country.

3) When the car is registered you also have to pay 150% of a car’s market value along with the registration fee. You do get this back when you sell it (i.e. 150% of the car’s market value when sold), but nonetheless this is still a huge outlay.

So basically, for the price of the car I drive here, I could have bought an Aston Martin in my home country. This is something my husband—who fancies himself as a bit of a James Bond character—laments on a regular basis.

Now, given the relative cost of the car I am driving in Singapore, I am sure you can understand why I don’t greet the driving conditions with open arms. Unfortunately it gets worse. Another issue I have concerns the fact that Singaporeans are not the worse drivers in the world— I AM! It took me no less than seven attempts over a period of six years for me to pass my driving test. I didn’t just fail my driving tests… I failed them in style. On one occasion someone had left the cars in the ignition of a car that was very similar to my driving instructor’s. As a result of my nerves I actually got into the wrong car and proceeded to drive off down the road, despite the fact that I could see my driving instructor in the interior mirror running after the car screaming and shouting (at least I was checking my mirrors)—I thought he was waving me off.

On another occasion I managed to hit the sidewalk/kerb while performing a maneuver, causing the wheel trim to go rolling off down the street with the examiner chasing after it, “before it caused an accident.” The worse one of all occurred on the test I actually passed. Half way through the exam it started to rain heavily and the windscreen of the car completely fogged over. I was very nervous—by the seventh attempt you have a lot riding on these tests—and couldn’t remember how to turn on the air. Looking for an alternative I just wound down the windows. By the time we returned to the driving centre, the examiner, the car and myself were all soaking wet. Despite this, however, he passed me. I think he just didn’t want to face the ordeal of taking me out on a driving test ever again.

I’ve always argued that my many years as a trainee driver served me well and that I was actually a very experienced driver by the time I legally got let loose on the roads. All who travel with me, however, don’t seem to concur, and I’ve often marveled at the speed at which people develop tourettes after spending time just minutes in a car with me at the wheel.

Now you would think all this would make me an anxious driver. It doesn’t. As I drove along the street this morning with one hand on the wheel and one hand repeatedly alternating between hitting the horn and gesticulating to other drivers, I realized I actually quite like it. It’s kinda like a real life Mario Kart… I’m even contemplating throwing a few banana skins out of the window!