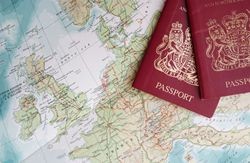 Adventures of a Tai Tai: A Comprehensive Guide to the Brits

After several months of reading my blog, my husband pointed out to me that I have spent a great deal of time critiquing the culture and behavior of my hosts and should occasionally take a look at myself. He observed me grooming myself in the mirror for over half an hour before pointing out that when he told me to take a look at myself he had intended it more as a deeper, introspective analysis, as opposed to an instruction to literally admire myself in the mirror. He laughed as he said this. I laughed on the outside but on the inside harbored a deep resentment that would one-day return to haunt him…

After some thought, and further grooming, I decided that I really should consider the British culture and how some of the things we do may be perplexing to fellow expatriates throughout the world. I have therefore decided to present a comprehensive guide to the Brits and their various idiosyncrasies. In doing this I hope that I can help any expatriates from other countries who come across the people from the small, rainy country that is the United Kingdom, to understand our strange habits. However, you should be warned that not every Brit is like this. That said, you will generally find that everyone you meet from the UK will exhibit at least one of these traits. If you are lucky enough to come across someone who has them all, then you really have met a true Brit… and you should quickly excuse yourself and leave!

Comprehensive Guide to the Brits

We don’t bother trying to be politically correct. The majority of Brits just say it how it is. We don’t care about allowing others to save face or try to politely skirt around important issues. We take great pride in the fact that we just wade right in and get straight to the point… we’re in a rush after all!

Yes, we like to drink. Most Brits simply love a drink; it’s a national sport. The phrase “the more the merrier” is not wasted on us, that’s for sure. I truly believe that if a Brit were to read a book on the evils of drinking, they would stop… reading. Although we love a good beer, the more refined and classy Brits will often opt for wine. The youth of today seem to have forgotten all sense of taste as a result of a hugely successful marketing campaign that convinced them that cider with ice was fashionable, and they now drink this in immense quantities. If you are asked to drink with a Brit you will be expected to drink as much as them or will be called derogatory names that undermine your viability as a human, especially if you are male.

Some of us are hooligans. Unfortunately, there is a percentage of the population of the United Kingdom who simply love to cause trouble. There is no real reason for this but it is often attributed to the fact that it is so cold, grey and boring in Britain that they seek some kind of excitement. I remember thinking during the lead up to the 2008 Olympic Games that it was no coincidence that England’s medal hopes rested on competitions such as boxing, shooting and wrestling. Fortunately, the hooligan phase of an average Brit’s life does not usually extend beyond the early twenties, or alternatively, the end of the football season.

We really do constantly discuss the weather. If you want to form an instant connection with someone from Britain you simply have to be good at discussing the weather. The problem is that, regardless of what the weather is actually doing, we will not be happy with it. The same people who constantly moan that the British summer has been poor this year will, as soon as the temperature rises, then whine about the fact that they are too hot. They will undoubtedly then progress onto complaining about everything and anything. What may start as an innocent comment on ho w nice the weather is, well, before you know it, have deteriorated into a long-winded rant about how we don’t like the government, the postal service, public transport, parking fees and taxes. I hate the way that happens…

We are eccentric. Nobody does eccentricity better than the British. We talk to our plants, give our cars names and personalities and we keep pigeons. Some of us are just totally off-the-wall. What is more, we simply don’t care. We do not need others’ approval and we don’t care about their disapproval. A phrase that is commonly spoken by the average Brit is the rather eloquent, “If they don’t like it they can lump it!”

We love tea. For the majority of Brits there is nothing like a cup of tea to solve all your worries. You may have had a very bad day; been sacked from your job, crashed your Ford Mondeo and arrived home after hours being interviewed by the police to find your wife in bed with another man. When your Mum arrives to console you, you can rest assured that the phrase, “everything will be fine, have a nice cup of tea” will be spoken almost as soon as she walks through the door. And, of course, she’s right.

We’re great at queuing. If you want to get along with the Brits without major incidence you simply have to wait your turn. British people are notorious for queuing and will queue for absolutely anything. I read an article in a newspaper once that claimed that more Brits than Americans died when the Titanic sunk because they queued for the lifeboats! While I am slightly amused by the image of Britons queuing politely while surrounded by absolute mayhem, I can’t help but agree with their actions. If there were no queuing, where would we stand? What would we all do? How would we know whose turn it was? There would be mass pandemonium and terror; it would be the end of the world as we know it!

On a side note, we also hate queue jumpers; people who do not wait their turn and try to cut to the front of our well-implemented queue. The quickest way to upset even the most polite and reserved Brit is to push in line as they wait for a beer. Queue rage is quite terrifying to observe… you have been warned!