Adventures of a Tai Tai: Hong Kong Summer is Over!

So the long sweltering heat of the Hong Kong summer is behind us and the pleasant temperatures and dry clear skies of Autumn are upon us. In fact, ask any expat in Hong Kong and they will tell you that this is the best time of year to be here. From October to December, as it is getting progressively colder and more miserable in Europe and North America, temperatures in Hong Kong are a moderate to comfortable 24 – 28 degrees Celsius, low humidity, little or no rain and generally clear skies. Perfect, in fact, for an afternoon lazing by the pool…

Perhaps not! For the locals, the 1st of November signifies the start of winter. Not only are the outdoor swimming pools closed as it strikes midnight on the 31st of October, they are also immediately drained in order to prevent roaming gangs of Tai Tais from making clandestine raids into the swimming area!

It doesn’t stop there. As I write this, it is 27 degrees outside, the sun is blazing down and people are walking around the park in woolly winter coats! The threat of getting ill is ever-present here and as soon as November arrives the girls start to complain that they are catching a winter cold.. at least I think that’s what they are complaining about, it is very difficult to make out the muffled words through the thick layering of scarves that could double for a sleeping bag. People here seem to believe that if the temperature falls below 20 C and they are not dressed like an Eskimo, then they may succumb to a severe bout of pneumonia!

There is, however, a further explanation for this behavior. I have recently figured out the reason for this apparent overreaction is something that we all hold dear to our hearts… fashion! What else could make a seemingly rational female abandon all common sense and wear knee-high boots and a Prada duffle coat in temperatures that are exceeding 25 degrees Celsius? Of the biggest surprise is the fact that this affliction seems to have also spread to the Hong Kong male. 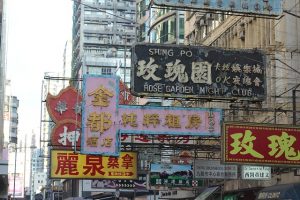 Last week my husband went to H&M to buy some shorts (sensible and rational given the temperature) and returned with a brightly multi-colored woollen jumper and skin-tight purple jeans. Nice look! Fortunately, he had the opportunity to put these items to good use when we were invited to a “bad taste” party for Halloween… he went down a storm. Unfortunately so did I, when my outfit went slightly wrong and I ended up looking like an eighties hooker… more bad-taste than I had intended!

Not only does time of year mark a sudden change from shorts and flip flops to polo necks and boots, it is also the time of Halloween. Halloween in Hong Kong is the busiest social event of the calendar; everyone dresses up in all manner of costumes and it is generally accepted that you can wear what you want as long as you look like a complete and utter moron. Whilst this comes naturally to my husband, many people have to try much harder. Despite the varying success with costumes we do all have one thing in common… the fact that on Halloween we are prepared to pay $15 USD for a bottle of beer. This is something that makes us all, at the end of the day, morons!

Autumn is also the time of the Mid-Autumn festival, often referred to as the moon festival, something that is celebrated throughout Asia. This time of year is marked by the giving and receiving of ‘Moon Cakes’. These are round (obviously), pastries with typical Chinese style ‘sweet’ fillings. I have some trepidation describing red bean paste as sweet, but they have also diversified into yellow bean paste.

I personally do not feel spoilt for choice! On the first occasion of trying a small piece (during a visit to Hong Kong before we lived here), my husband thought they were quite pleasant. He preceded to buy a dozen, only to find out later that you are, in fact, only meant to have a very small piece in one sitting as they are ludicrously heavy and, after several mouthfuls, quite sickly! My husband decided to take the remaining cakes to his office as a goodwill gesture to his colleagues, it was only days later that his boss requested that he was relocated to Hong Kong… permanently.

So this is Autumn in Hong Kong, roll on Christmas, that’s what I say!