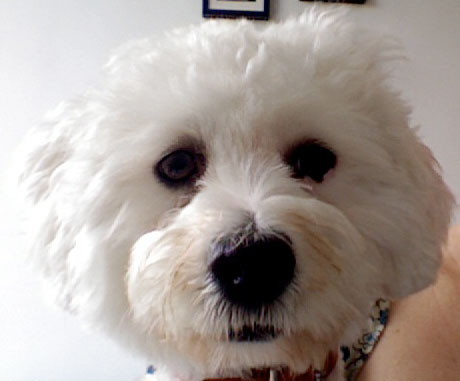 You’re probably wondering if I did ever get that dog… I did. Spongebob is his name.

I will never forget the day he arrived. I had expected him to be overwhelmed at his new home, perhaps scared and nervous to suddenly find himself in a new place with new people… nope! He ran straight through the front door, did three or four circuits of the apartment, located his bed, rolled around in it and then walked calmly back into the lounge and stood in front of me. In a moment resembling the scene preceding a shoot-out at the OK Corral, he stared at me intensely. He looked at me. I looked at him. He squatted and commenced relieving himself on my imported Italian rug. It was the start of a beautiful relationship.

It is true to say that Spongebob has changed my life. I hadn’t really known what true joy and happiness was until he arrived, but by that point, it was much too late and he was here to stay. My husband had bought me a pet abroad to keep me challenged and give me company and of course, Spongebob does both of those things. He has taught me patience, what my cushions are stuffed with and the need to turn around three times before lying down. In addition to this, he possesses a strange knack of knowing how I feel. He doesn’t care, but he knows. 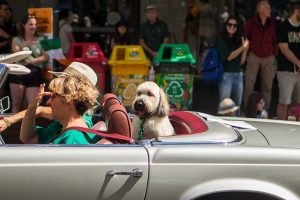 Owning a Dog in Asia

Owning a dog has opened my eyes further to the idiosyncrasies of Chinese culture. There are basically three types of people in China; those who love dogs, those who are terrified of dogs and those who eat dogs. Let’s start with the first category. A large percentage of people here do love their dogs… too much. It is not uncommon to see dogs carried around in handbags as they sport diamante collars and painted nails. I personally have even had the pleasure of being seated in a restaurant next to a dog in a pram. My dog, although groomed on a regular basis, favors the unkempt look and despite our best efforts, often resembles an overused mop.

I bumped into a Spongebob doppelganger one afternoon as we were out walking and his owner shrieked with excitement, “wow, they look exactly the same”. Except they didn’t… her dog was wearing trainers, a tartan coat and was so perfectly groomed that he looked like a white cotton ball with eyes and Air Max. My dog was more grey than white, had unidentifiable foliage sticking out of his tail, mud all over his face and was drooling everywhere. As I observed the two dogs side by side it seemed so apt that, on one of the few occasions that I had been provided with an opportunity to personally choose a member of my family, this was what I had ended up with.

The second category of people, the people who harbor a deadly fear of canines, are in abundance here in Hong Kong. I’ve observed people duck behind bushes, jump on top of stools, run back onto a bus from which they had moments earlier disembarked or cross the street just to avoid getting within 10 feet of my 7.5 kilogram terror. On one occasion a grown man shrieked in my face as I appeared around the corner with Spongebob. He screamed I screamed, Spongebob started barking and the man screamed even louder. Eventually, we all composed ourselves and went rather sheepishly our individual ways. I have attached a photograph of my evil monster dog… a true menace to society.

As for the third category of people, I am going to stay well clear of that topic for fear of retribution…