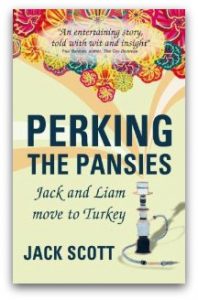 Perking the Pansies tells the story of a gay couple who decide to leave their depressive work-dominated lives in London behind them in search of an adventure overseas. The couple choose Turkey as their destination, something that surprises those around them, as their neighbor is only too ready to point out: “Good God Jack, Turkey? You’re a homosexual. There aren’t any homosexuals in Turkey.”

Written by Jack Scott, an expatriate blogger who has amassed a huge following as a result of his online chronicle of the trials and tribulations of two “recently ‘married’ middle aged, middle class men escaping the liberal sanctuary of anonymous London to relocate to a Muslim country.”

Many of the details of his life in Turkey have now been released in book form, in which Jack gives an open and honest account of what it was like to live in Turkey with his husband.

In addition to providing insights into the live of a homosexual married couple in a country that is not well-known for accepting such a concept, the book also makes some interesting observations about expatriate life in general and provides some heartfelt commentary on how expat life can impact who you are as a person. All expats are bound to cringe in recognition as he describes the expatriate community he encountered, “Those who live in utter ignorance of the history and culture of their foster land, shout loudly in English, and see the world at large through the narrow-minded pages of the Daily Mail.” He also comments on the ways in which expat life can bring out the worst in people and chronicles how it is all too easy to find yourself caught in a situation that doesn’t reflect who you truly are.

Meanwhile, however, Jack discovered Turkey and fell in love with the people and culture he found there: “Turkey is a magical land graced by a rich culture, gorgeous people and an intrinsic love of the family. A respect for difference won’t destroy that. It’s okay to be queer…”

Jack’s story is extremely funny and eye opening and is extremely well written. If you dream of leaving behind the rat race and the pressures of the society in which you live in favor of finding your own haven of tranquility, then this book provides a great overview of some of the difficulties you may encounter and the benefits you will reap.

You can read more about Jack’s adventures at http://perkingthepansies.com/ and can purchase his book online at Amazon.