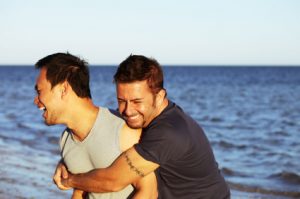 Once a city that was far from gay-friendly, Shanghai has come a long way and the local community has evolved to cater for members of the LGBT community. Its gay scene has undergone a tremendous spurt and there are now a large variety of gay bars, a dedicated far hotel and entertainment complex. Shanghai now hosts an annual gay pride week and even has a gay magazine. While the scene has certainly come along way, there remains some killjoys in the city and the government does stamp there feet on some gay websites and events from time to time.

Where to go: Perhaps the center of the city’s scene is the French Concession, where popular gay nightspots include Eddy’s, Shanghai Studio, and Transit Lounge makes up what has loving become known as the “Gay Triangle.”

Mexico’s bustling, creative arts scene attracts gay people from all over the world and is slowly becoming a gay travel hot spot. Every June they hold the annual Gay Pride parade and the city was the first in the region to break new ground by legalizing same-sex civil unions. There are over twenty bars, discos and clubs in Mexico City that cater specifically for gay clientele, the majority of which can be found in the Zona Rosa.

Where to go: Check the nightlife listings in Homópolis.

It will probably come as no surprise that Las Vegas is gay friendly: Las Vegas welcomes everyone. According to a 2011 survey by Community Marketing Inc., Las Vegas is the third most gay-friendly city after New York and San Francisco. The area contains over 17000 square feet of gay clubs and entertainment venues.

Where to go: Don’t miss Krave, which has been voted the number one gay destination in the United States.

Sydney’s annual Mardi Gras festival, which was first held in 1978, is famous throughout the world and firmly represents Sydney’s propensity to celebrate lesbian, gay, bisexual and transgender cultures. In 2010 travel agency Expedia compiled a list of the world’s best gay-friendly cities. Topping that list was Sydney, which scored highly as a result of the large amount of gay bars and entertainment venues that could be found in the Darlinghurst and Newtown areas.

Where to go: For weekly listings pick up either The Sydney Star Observer or SX. Both also have websites with event listings. For girls Lesbians on the Loose (LOTL) is the main weekly paper.

The city that produced Judy Garland simply has to feature on any list of gay-friendly places to live and it frequently does as a result of the sheer strength of the LGBT population in the city. According to statistics, there are 272493 people living in the city who identify themselves as LGBT and the community represents approximately 4.5% of the city’s population. In a 2012 survey by GayCities.com, New York won the title of Best Nightlife City with 32 per cent of the vote.

Where to go: Mingle with a pretty and diverse gay crowd at Therapy, a this hot nightspot in Hell’s Kitchen. GYM Sports Bar is New York City’s first and only gay sports bar.

Having legalized same-sex marriage in 2005, Canada has made the list with Toronto, which is due to host the international World Pride event in 2014. Perhaps one of the more alluring aspects of Toronto for members of the gay population is that, although there is quite a large gay village, public displays of affection between homosexuals and open displays of sexuality are common and accepted throughout the city. This makes Toronto a play where members of the LGBT community really can be themselves.

Where to go: Check out Xtra for a list of the best gay hangouts in the city.

There’s no doubt that Bangkok is the queer capital of Thailand and the city is full to the brim of gay bars, entertainment venues and hotels. One of the biggest lures to this Asian capital is often the transvestites and transsexuals, many of whom have an amazing reputation from being completely undistinguishable from the females on which they model themselves. Bangkok really is an “anything goes” city and members of the LGBT will not only fit in when living here but will also have an amazing amount of fun in the process.

Where to go: Check out essential guides to Bangkok’s best gay and lesbian bars compiled by CNNGo readers.

London is a place that recognizes same-sex unions and embraces people’s sexual preferences. The city is very popular with gay people from throughout the world and welcomes gay couples with a plethora of living options and recreational opportunities. One of the most popular hangouts for members of the LGBT community is SoHo, which is famous for its eclectic offerings, while Old Compton Street acts as the gathering point for the gay community in this part of the city. Now that same-sex couples can adopt children, queer families have become a common feature throughout the city.

Where to go: Check out Visit London’s guide to the Top 10 Gay and Lesbian Clubs.