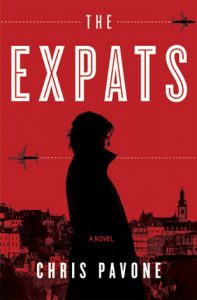 Reinventing yourself in a foreign land is the stuff of dreams for many people and this couldn’t be truer for Katherine Moore, who jumps at the opportunity to move overseas with her husband, Dexter, when he is offered a plush expat contract in Luxembourg.

Heading off with dreams of quitting work and becoming a stay-at-home mom, Katherine is excited about the prospect of changing her lifestyle and finding herself once again, she even plans on dropping the formal “Katherine” in favor of “Kate.”

The problem is that the job that Kate’s quitting isn’t quite the type of work that the typically trailing spouse would be involved in. Kate actually works for the CIA and she’s hoping to leave behind more than just a job…

The Expats is a fiction written by Chris Pavone, an expatriate himself who spent some time living in Luxembourg. He uses his own experience of living overseas to provide an air of authenticity to Katherine’s story and the events of her relocation to Europe.

Many of Katherine’s experiences will ring true with expats: she forms friendships with people with whom she has nothing in common, struggles to set up home and deals with some of the more tedious elements of being a stay-at-home expatriate, something that many of us will have experienced at some point.

However, there is one element of life that sets Katherine firmly apart from the average expatriate, she is a former CIA operative and when Katherine gets board it leads to a whole host of adventure that has far-fetched consequences…

The book starts off quite slowly and at times it can be confusing to read as it rapidly switches between three different time periods: present-day Paris, the past and the chronology of their move to Luxembourg. The book will certainly resonate with many expatriates and Pavone very accurately conveys the challenges and frustrations that can be an integral element of living overseas.