What’s Extreme Schooling for Expat Children and Does it Work 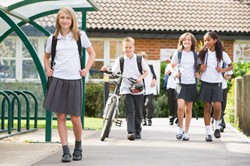 Last week I came across a great article in the New York Times that described how one expatriate family had engaged in a schooling experiment with their children while living in Moscow. They shunned the many international schools on offer in Russia and instead opted for a local one, with local Russian children and teachers and absolutely no English language. For children that had been born and raised in Brooklyn, New York, this was bound to come as a shock and the author of the article, and father of the children involved, describes how ‘the fantasy of creating bilingual prodigies immediately collided with reality.’

At first the children involved in this schooling experiment were ‘miserable.’ They didn’t understand what was happening around them, missed their lives in America and felt isolated and ‘dumb’. It wasn’t much easier for the parents. They found it difficult to watch as their children struggled, found themselves conflicted as to whether they were following the right path and berated the fact that they were unable to even discuss how their offspring were progressing with their own children’s teachers: ‘How can you help your children when you can barely communicate with their teachers?’

However, the appeal of the school and the educational opportunities that it offered could not be ignored. The children were offered an opportunity to study in an environmental environment within which they were encouraged to think for themselves. While the school taught standard subjects, like Maths and history, it also introduced the children to new ways of thinking through courses such as antimanipulation, which was intended to arm children with the skills needed to decipher commercial or political messages, or myshleniye, which encouraged critical thinking. In many ways the children’s educational experience stretched far beyond that on offer in many typical international schools. As the founder of the school, Vasiliy Bogin, commented: “Life is the best teacher.”

The children themselves seemed to be able to evolve and cope with the situation much better than their parents. They developed their own coping strategies, requested additional help from teachers and learned the social skills necessary to try and communicate with people who did not speak the same language. Describing how she dealt with the situation she was in the author’s child said: “It was kind of like solving a code, because every day, you just have to figure out something new to say and some new way you have to act.”

Over time the children began to find a place for themselves in the school and were no longer subject to their classmate’s ridicule but were embraced as members of the school, friends and peers: “They no longer translated from English to Russian in their heads — the right words tumbled out.”

Through reading the article it is clear that this American family did gain a great deal from enrolling their children in a local school and embracing the life of their host country. If you’re relocating and are unsure as to which type of schooling will be appropriate for your children then do check out our free guide to choosing an expat school for your children.

What do you think about extreme schooling? Do you think it’s a good idea or that it places too much stress on children? Leave a comment below and share your views.