Tips for Expatriates in Dubai : Stay on the right side of the law

Dubai is an extremely popular destination for expatriates, it offers white sandy beaches, a tax-free lifestyle, a great nightlife and it is generally considered to be one of the best shopping destinations in the world. However, there is an inherent danger in ignoring the strict rules of society for expatriates in Dubai country and recent press reports concerning expatriates and vacationing British nationals has raised new concerns about the behavior of foreigners in this Muslim country.

Charlotte Lewis, 25, from Palmers Green in London and Ayman Najafi, a British Dubai-based marketing executive is currently facing up to one month in a Dubai prison as a result of allegedly kissing in public while drunk last November. The pair, who deny the allegations and are currently, appealing against their one-month jail sentence, was apparently observed kissing and stroking one another’s backs.

Dubai has developed a reputation as being more liberal than many other Muslim countries there remain a number of very strict laws in place that should be adhered to at all costs.

As the case with Charlotte Lewis demonstrates, all type of romantic physical contact in public is disallowed. This includes restaurants, bars, public transport and buses. Save kissing and cuddling your loved one for the privacy of you own home or hotel.

Although the dress code is slightly more relaxed in Dubai than it is in other Arab Emirate countries it is still advisable to dress conservatively. Low-cut tops or reveling dress should not be worn in public places, especially near places of religious significance. 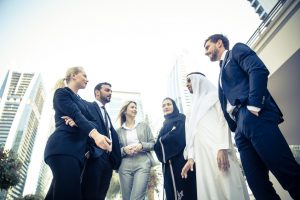 Prescription drugs for expats in Dubai

Certain types of medication are not permitted in Dubai and if these drugs are found in your bloodstream you can be put in prison for up to four years. If you are reliant on any type of medication ensure that you fully check its legality in Dubai before you make any arrangements to go and live there.

Some of the customs, traditions and bureaucracy that are present in Dubai belong very much to this part of the world and, if you’re not forewarned, can come as a big surprise. Living amongst such contradictions can seem confusing and somewhat overwhelming. However, by finding out the realities and becoming informed of the practicalities of expat life here, you can quickly come to appreciate this ever-changing city of contrasts. The Expat Info Desk guide to Dubai provides full insights into the strict laws, traditions and cultural beliefs in Dubai so that you can be prepared in advance for your move there and avoid inadvertently insulting the people you live amongst.