Musings on Expats on Fitting in with the Locals

An obsession with the avoidance of catching any type of flu or cold. Gratuitous disinfection is the order of the day and I often notice the receptionists in my apartment building liberally spraying antibacterial cleanser behind me as I pass through the lobby. Sure, after events in Mexico, people the world over have started to be on their guard, but it seems here, as always, it goes just that little bit too far.

This morning was a case in point. I was queuing in the supermarket to pay for my groceries (my life is all glamour). Whilst waiting I looked around and noticed that the three people behind me, as well as the checkout assistant, were all wearing masks (masks of the surgical variety, that is, not those that became popular after the launch of the film scream). I felt like I was in some kind of post-apocalyptic science fiction film. Worse still, my appearance in public as a non-mask wearer was gaining sympathetic looks from all those mask wearers. It suddenly occurred to me that they knew something I didn’t and I was going to die. I started to consume my supply of Oreos… I wouldn’t be needing those where I was going.

Standing in line waiting for the queue to move I had time to think things through and I reprimanded myself for being so stupid. As someone with experience as a drug peddler pharmaceutical marketeer, I should know better. The reality is (and this is true people), surgical masks are only for preventing the spread of germs if you, yourself, are infected. If someone is stood next to you has the unfortunate disposition of being infected with a killer flu virus, even if you are wearing a mask, there remains a high possibility you will still contract the said killer flu virus. So really, if you want to protect yourself effectively, your only option is a biohazard suit. Contemplation of this alerted me to the fact that I had a new problem. Everyone surrounding me clearly had a killer disease and was going to die and, if I didn’t take action quickly, they were going to take me with them. 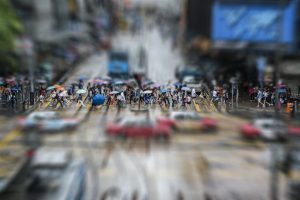 I reflected on the severity of my situation. I was here, a perfectly healthy individual, innocently purchasing Oreos, who was suddenly surrounded by people who were carrying a killer disease (they must have something wrong with them, they’re wearing masks). I tried not to panic and commenced the deep breathing exercises I had mastered whilst herding Mongolian Yak on a Buddhist retreat.

Luckily I’m quite quick on my feet and I suddenly remembered the advice that had emerged from the US Government during the Mexican Pig Flu crisis, “Maintaining a distance of at least six feet from other persons may decrease the risk of exposure”. I backed my trolley away from the women in front of me and screamed at the women behind, “give me some space here, take two steps back… now!” Just as I was constructing a barricade out of the reduced-price bulk packs of toilet roll I was asked to leave the supermarket.

It is clear that my time in Hong Kong as an expat really has started to turn me into an egg (a popular description for someone who is western but acts Asian… white on the outside and yellow on the inside). Before living here, I used to observe the Chinese obsession with attempting to insulate themselves from the filth and disease of their fellow human beings with pity. “How ridiculous” I would think, whilst commending myself on my superior understanding of the world.

I would laugh as I watched people board the underground train wearing masks under their noses yet failing to notice the fact that this had completely missed the point. But living here as an expat for almost two years now has changed me. As I write this, I realize the error of my ways and acknowledge the fact that my previous views were shrouded in a mist of ignorance; they were right, I was wrong. Actually… scratch that… I have just realized there is no mist- the mask I am wearing has fogged up my glasses.