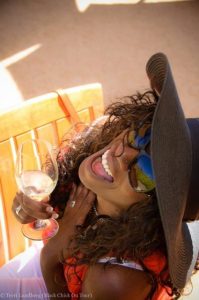 Today we meet Terri Lundberg, a US-born expatriate who has a fascinating story to tell. Following her husband to Saudi Arabia, Terri faced the negative reactions of her friends and family head on and decided to carve out a role for herself in a land that is very different from home. Here she describes how she has made the most of her status as a foreigner in a culturally sensitive land to help other people to adjust and learn about what they can expect from life in Saudi Arabia.

Can you please tell us a little about your background. Where are you originally from and why did you first move to Saudi Arabia?

I’m originally from San Diego, CA. I moved to Seattle in 2000, and from Seattle to Saudi Arabia in 2008. I moved to Saudi Arabia because my husband was offered a job that paid more money than he could ever hope to make in the States and the benefits are amongst the best in the world. When he first went there for employment, I didn’t go with him. I continued to work at Boeing and he came home for 2 weeks, every 10 weeks. When they offered him a permanent position, he accepted, and I made the choice to join him.

What were people’s reactions when you told them you were planning on living in Saudi Arabia?

There were so many reactions, but I think the overwhelming opinion was that people thought I didn’t know what in the heck I was doing. I had one friend who called me up panicked, and wanted to know if I knew that women can not drive in Saudi Arabia. I laughed and said, “Yes girl. I know.”

What do you enjoy most about living in Saudi Arabia?

The benefits and the income are the biggest things for us. It’s what keeping us there. The next thing would have to be the wonderful people who I’ve met along the way. And, the life experience is priceless.

The restrictions and the takeaways. When they ban apps like “Whatsapp” I view these as takeaways; it’s something they’re taking away.

What advice would you give to someone who was relocating to Saudi Arabia for the first time?

While living in Saudi Arabia you have started to provide cross-cultural training to other women/expats who may find themselves in a similar position to yourself. Please tell us more about what you do and the ways you help people.

I have two online platforms that I use along with email. I have a closed group of Facebook that I use to speak freely with western non-Muslim women who are interested in working in Saudi Arabia. I have a blog that I answer questions through, and I’ve created a training module that I share. I receive several emails a week from people asking about some aspect or other in regards to moving to Saudi. I respond. I act as a resource.

What prompted you to start this initiative?

When people started to reach and thank me for sharing my experiences. It certainly wasn’t my intention when I first started. However, once I realized I could help other people, I started to put effort into it.

What are the biggest challenges you face in running your business?

I have no idea. I have a few thoughts in regards to the direction I hope my life will go and I’m working towards those goals. But, I’ve learned that what I have planned and what life has in store for me are two different things.

If you would like to learn more about Terri and what she does, you can get in touch with her on her website: Black Chick on Tour