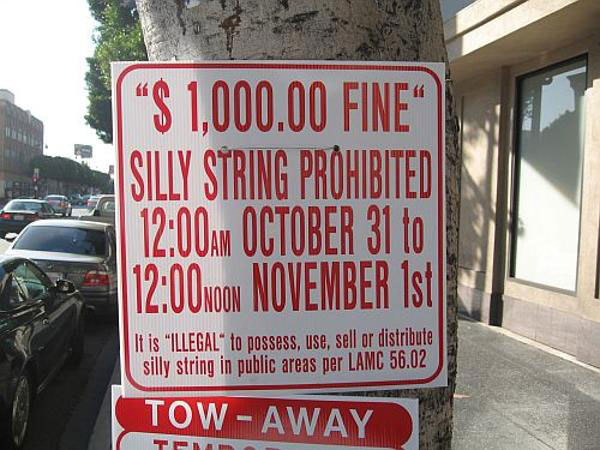 Stupid Laws From Around the World

Every expat around the world will no doubt have complained at some point about a rule or law in their host country that just doesn’t make sense. It seems that when it comes to the law, we’re much better at implementing regulations than we are at removing them, and for this reason many archaic rules and laws from days of yore are still on the books today.

However, if there’s one thing that insane laws are great for, it’s a good laugh. Here are some of the best stupid laws from around the world. Thinking of dragging a dead horse down the street in Canada? You’d better think again!

Here are some of the best stupid laws

In the city of Liverpool in the United Kingdom it is completely legal for a woman to walk around topless, providing she is selling exotic fish at a fish market. So if you’re looking for gratuitous topless models, you know where to go—although a fish market in Liverpool may not quite take your fancy.

While you may enjoy some freedom at a Liverpudlian fish market, elsewhere in the UK you should tread very carefully. It is illegal to place a postage stamp of the Queen’s head upside down, all city cabs must carry a bail of hay in their trunk at all times and, if you’re in danger of departing the earth any time soon, make sure you stay away from the Houses of Parliament: it is illegal to die there. However, if you do have the misfortune of passing away while in parliament, fear not- your blatant disregard for the law shall be rewarded with a full Royal state funeral (who said crime doesn’t pay?).

Man with onions coming through

Across the channel things do not seem to be any better. In France it is illegal to name a pig Napoleon, you must give way to a man carrying onions on the streets of Paris and don’t even think of trying to sell an E.T. doll; it is completely against the law to sell any dolls that do not have a human face… there’s a few jokes that I could make here but I shall refrain in the interest of good taste.

Elsewhere in Europe the strange laws continue. In Italy, anyone who has enjoyed one too many spaghetti bolognaise should beware; it is illegal for obese individuals to wear polyester—stick with silk! In Germany you can go as fast as you like on some stretches of the autobahn but whatever you do, make sure you don’t break down- it is illegal to stop at any time.

Are you fully loaded?

When it comes to interesting laws, there’s no doubt that North America has some of the best. I hear that in Washington State it is illegal to carry concealed weapons that are over 6 feet long, hmm… how exactly do you conceal a six-foot long weapon? In Texas, it isn’t the length of the gun that’s the problem, it’s whether or not the gun’s loaded. According to reliable (ahem) sources, it is against the law in this state to threaten someone with an UNLOADED gun… so a loaded gun is totally fine then? If you are planning on intimidating someone with an unloaded gun just remember, apparently it’s also mandatory in this state to give the police 24 hours notice if you are planning on committing a crime:

“Put those donuts down boys, we have to prepare for tomorrow’s infringement of the law!”

It is also illegal for waiters and waitresses in Los Angeles to claim that they are really actors, restaurants in New York are not permitted to describe a sandwich as corned beef if it is made with white bread and contains mayonnaise and, probably one of the best yet, in Toronto it is illegal for people to drag a dead horse down the Yonge Street on a Sunday—sorry, you’ll have to change your plans for the weekend.

Is it cold in here or are you pleased to see me?

Asia provides us with even more interesting laws that the expatriate community must have at their disposal. It seems that Asians may have an obsession with underwear. In Thailand it is apparently illegal for you to leave your house if you are not wearing suitable undergarments and in Japan women are legally required to wear bras when entering buildings with air conditioning; I’ll leave the reasoning for that one to your imagination.

Elsewhere in Asia, in Singapore it is against the law to carry a bible and talk to people about Jesus, in South Korea all dogs that are sold for the purposes of consumption must have a government approved tattoo and, in China, if you see someone drowning, you are legally obliged to leave them to it as it would be interfering with their fate to try and rescue the poor soul.

And so I reach Australia, which, once again, does not disappoint. It seems that clothing is of significance in this area of the world. Rumor has it that it is illegal to wear black clothing, felt shoes and paint your face black with shoe polish in Australia as to do so would imply you were a cat burglar. Nor is it legal to dress up as Batman (is this true?). Don’t even think of swapping your black slacks or batman costume for pink hot pants either, these are totally banned on Brighton Beach on a Sunday afternoon.

Want more? In Australia, it’s illegal to name any animal you plan to eat (so no Napoleons there either), a life sentence in prison is actually 200 years, it is illegal to force a kangaroo to drink and no man under 4ft 8 inch is allowed to surf on Klondike Beach (talk about sizeist!)

Ridiculous laws or urban myths? I’ll let you decide, either way, perhaps some of the laws us expats live by are not so bad afterall. Next time you bemoan the strict laws of your host country, spare a thought for the people of California, here law states that persons classified as “ugly” may not walk down any street; how does this impact Steven Tyler I wonder?

Have you heard any of any strange laws? Share them with us by leaving a comment below.