A Global Guide to the Good Old-Fashioned Handshake 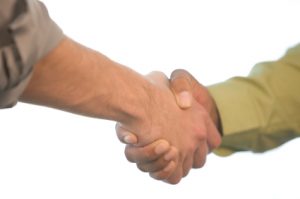 Handshaking is an ancient greeting that has traced as far back as 2800 B.C., where it was believed Egyptians presented their open right hand as a gesture of peace—without their right hand they would be unable to carry a weapon. The popularity of the handshake has continued through to modern times and remains an extremely popular form of greeting.

However, while the act of greeting may be simple, the actual method of shaking hands can vary enormously in many cultures around the world. For example, in Benin in Africa it is custom to snap the fingers of your left hand while shaking hands with your right, and in Botswana people don’t actually shake hands, but lightly tough palms.

Regardless of the method of handshake one thing remains, it constitutes an integral element of making a first impression and it is therefore crucial that you get it right. Here’s a quick overview of some of the subtleties that you may observe in the method of shaking hands in your host country.

The typical greeting in India generally involves the word “namaste,” which translates as, “I honor the spirit in you.” Many Indians will greet each other by placing their palms together in a prayer-like pose as they voice namaste. Westerns will not be expected to use this type of greeting and in business settings a handshake is much more common.

Generally speaking, you should allow the senior individual to initiate a handshake. You should offer your right hand and, once the handshake has been initiated, you may find that the person greeting you places their left hand over your joined hands. This means that the initiator is giving you a two-handed shake. You can respond in the same manner but this won’t be expected.

North Americans generally operate on the principal that a firm handshake represents confidence and professionalism, while the British and Australians also use a firm grip it is usually slightly softer than those used by their U.S. counterparts. The majority of people in these countries will expect a handshake to be accompanied by eye contact, as this is perceived to indicate that an individual can be trusted. If you are wearing any gloves you should always take these off before initiating a handshake as many people, especially in the United Kingdom, consider it rude not to do so.

Handshakes in South Africa are generally long, involved and softer than those you would use in the West.

In the Arabic-speaking areas of the Middle East handshakes are generally quite soft and to actually grip an individual’s hand hard while engaged in a handshake can be perceived as rude. Here it is common to keep the hands held limply together for an extended period, even after the initial semi firm shakes.

The act of greeting someone with a handshake is a very important part of culture in Austria and all Austrians will greet each other in this manner, even children. In Austria men are expect to stand to greet one another but women may remain seated.

Brazilians value physical contact extremely highly and embrace the value of the handshake. Many Brazilians will use a firm grip and will shake hands enthusiastically while patting you on the back or squeezing your shoulder.

The handshake is a greeting that is not traditional in Japan, although it is now widely used in business exchanges. Always allow the Japanese to initiate a handshake and, if they do, ensure that you use a light grip and a soft shake. You may find that many Japanese people, even in international business meetings, will use the traditional bow as a means of greeting you. If they do, observe the depth of the bow they use and try and replicate it when returning the greeting. Keep your hands by your side and your eyes lowered.

In the majority of the major cities in China it is not uncommon for natives to greet westerners with a handshake. As in Japan, the grip is light and the action soft. Unlike westerners, the Chinese are weary of looking an individual directly in the eyes, as they perceive direct eye contact to be very personal. In addition to this, in Chinese culture the act of lowering your eyes indicates that you are showing an individual respect.

The method of greeting in South Korea will vary according to who initiates the greeting. South Korean’s are expected to bow to their superiors, so you can generally expect a junior person to bow to you as opposed to offering you their hand. Senior people are more likely to initiate a handshake and, as a sign of respect, will grasp your right arm with their left hand as they shake your hand.

Again, the handshake is not traditional in Thailand, although many Thai people do not use it in business interactions. However, be aware of the fact that touching a woman in Thailand, even when engaged in a handshake, is considered to be very rude.

Russian people shake hands both when meeting and when parting. If you are wearing gloves, always remove them before shaking hands and never attempt to shake someone’s hand over a threshold as this is considered to be extremely unlucky.

In New Zealand you are expected to shake hands with someone when you meet them for the first time but once is usually sufficient and you don’t need to shake their hand upon every meeting.

As a visitor to a country, no one will expect you to get everything right first time, so if you do make a mistake during that all-important handshake, don’t get hung upon it, just pretend it didn’t happen and carry on. However, as an expatriate living in a country over a long-term basis, you make every effort to learn the etiquette of the handshake and ensure that you show respect for other people’s customs and traditions.

Moving to a new country can be an extremely daunting experience, especially if the cultre and customs there differ enormously from those that you are accustomed to at home. If you are relocating, be sure to check our expat destinations guides. Each guide contains in-depth insights into the languages, religions, traditions and cultural customs that you may encounter in your host country and can help you to you to avoid any cultural traps that may offend.