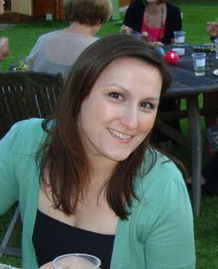 Today we meet Lara Child, a US expat who met and fell in love with a Brit while living in London and decided to stay for good. Here she shares details about what she loves and loathes about living in the United Kingdom and provides some practical tips and advice for women who relocate for love and find themselves starting life anew.

Please tell me a little bit about your life near Seattle, before your expat adventures began. Where were you living and what did you do for a living?

I grew up in Bellevue, then moved to West Seattle after graduating from the University of Washington. About a month later, I started my first ever “real” job as a Radio Promotions Assistant at Fisher Radio Seattle. I hated it – I lasted about five months. After leaving the radio station, I worked a bunch of different temp jobs, trying to figure out what to do with my life. After a year of this, I decided to go to film school in London, which combined my ambition of living abroad with the desire to learn more about the film and TV industry (my end goal was to train to be either a TV producer or editor).

Was your decision to move overseas for the first time difficult? Or were you excited at the prospect? Please share some of the thought-processes you underwent.

It was difficult logistically, but I felt like I needed a drastic change, something exciting. The fact that I came to London with a university program made everything easier – for example, housing was sorted via the school, and there were organized trips for exploring the city. I was very excited, and the plan was only to be gone for a year – I thought I would go have an adventure and then come back home to Seattle.

While living in the UK you fell in love and decided to stay on a long-term basis. How did your family and friends react to the news that you had decided to marry and stay in the UK. How did you deal with their reactions?

Everyone was actually really happy and supportive. Sam (my husband) asked my mom’s permission over the phone to marry me, and that really impressed her. When we were at the airport, my mom even said that I’d probably find some guy and never come back. I guess she was right! My family adore Sam, which makes everything pretty easy to deal with. We miss each other a lot though, and I often talk about moving back home – it would just be difficult to relocate and find jobs.

What emotions did you experience, both negative and positive when you started to settle into your new life in Britain and how did you deal with any negative feelings you encountered?

After about two weeks, I thought, “what am I doing??? This is such a bad idea; this school is not good; why am I getting another bachelors degree? I should be getting a masters! My mom needs me, I need to go home. After this term I will go home.” And that was what I planned to do – enjoy London for three months, but then leave the school (which was far too expensive and not a very good school) and return home. I hadn’t met Sam at this point though. Once I met Sam, everything changed – I moved in with his family and it became a whirlwind of wedding planning. Sam already had a career in London, so we agreed to live here. I still get negative feelings – the houses are too small, the roads are too crowded, the cost of living is ridiculous, the produce isn’t as good (and it’s all wrapped in plastic!), the customer service in this country is insanely bad. Dealing with negative feelings is hard, but I usually talk to my brother or my mom when I’m feeling down. Even if I just have a cry, it always helps to talk to them.

You have effectively become a trailing spouse. As a trailing spouse it is important for individuals to find a role for themselves. How did you approach this and what experiences did you have?

I guess I’m sort of a trailing spouse… although I came here because of my own ambitions; I stayed because of my husband. I’ve always been in school or work, so I’ve had my own life and goals – I don’t just sit at home and clean and wait for Sam to come home. It was really important to me to make my own friends outside of our “group” – Sam’s group of family and friends have all known each other since birth (pretty much) and they are all boys. I get along with the other wives and girlfriends, but I don’t really have a lot in common with them. I’m sort of a loner in that respect, I guess. I really miss my friends, the people who “get” me, so I’ve tried to find similar friends here and just keep active. I go running, I do Zumba once a week, I do yoga. I make friends through work and try to stay focused on my career development. My sorority also has an alumnae chapter in London, so we get together once a month – it’s so much fun to meet other Zetas from all over the US who are in the UK now.

How do you feel about the term “trailing spouse?” Do you think it is an adequate description of people who relocate for/with their partners?

I can see how the term makes sense, but I also think it sounds a little demeaning – like “groupie”.

What have you found the most challenging about living abroad?

The hardest thing is being away from my American family. It’s very big, but we are all very close, so not seeing my mom, brother, aunts, uncles, cousins, etc. all the time is really hard. Also, my mom has MS (multiple sclerosis), so I struggle a lot with guilt issues; I feel like I’ve abandoned her. My brother and some other family members help take care of her and she’s so determined to be independent, but I feel like I should be there with her. Adjusting to the culture here was challenging too – we speak the same language, but the British have a lot of terms that we don’t have in America, so it was tricky to learn those. Also to figure out what the swear words are: in America, you can say “bloody” and “bollocks” and it’s not that bad, but over here it’s not something you would really say in civilized conversation. The Brits can be just as bad though – a lot of people here think it’s okay to say “Red Indian” to describe Native Americans. I’ve had to explain to people several times why this is NOT okay.

What three things do you like the most about living in the UK?

What three pieces of advice would you give to women and men who are relocating to be with their partners?

What is next for you?

No idea! We have a two-year-old daughter, so she’s the main focus. I’m thinking about re-training as a teacher so that I’ll be able to look after her during school breaks when she starts going to school. I gave up my exciting career in TV and media so that I could be closer to home, but I still work full-time and that’s hard to balance sometimes. I’m hoping to find a new career path (again, ha!) that will allow me to spend more time with my daughter. I still really, really want to move back to Seattle, though. London is a great city, but so is Seattle, and I want to be with my family again